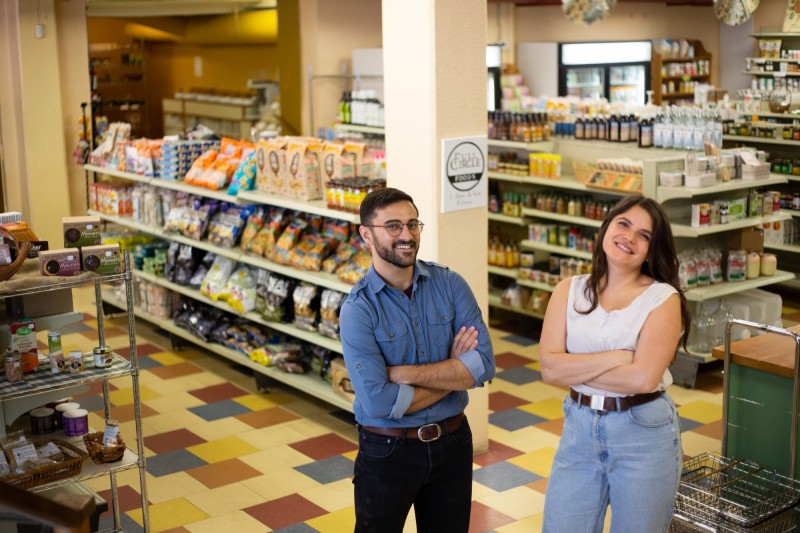 When you love something, you save it and Full Circle Foods, a sustainability-minded grocery store in downtown Kitchener, was much-loved. So when the old owners pinned a hand-scribbled “for sale” sign to the store’s community board, Sam Nabi and Julia Gogoleva alongside 22 community lenders did what they needed to do, they bought the nearly 40-year-old downtown staple.

“One of the reasons that we live downtown is because of that store,” says Nabi. “If Full Circle didn't exist, a lot of people who lived downtown and maybe don't own a car would have a lot harder time trying to (get) weekly groceries.”

“We were looking for a bit of an adventure and this was a really meaningful place… we wanted to help make it grow,” says Nabi. So in January 2018, they became grocery store owners.

He says the learning curve has been offset by the community, people love supporting Full Circle Foods, and it likely could have continued on its trajectory catering to the health food clientele. But Nabi and Gogleva have sought to retain that feel while organically growing their offering to become a full-service grocery store.

The pair had an understanding of the importance surrounding digital presence, but transforming a shop opened in 1981 with all its legacy systems and processes, required a bit of support. So when the pair heard about Digital Main Street through their BIA, they knew it was a good fit. The Digital Main Street program combines grants and one-to-one support from the Province of Ontario and the Ontario BIA Association to help main street businesses across Ontario strengthen their digital and online capabilities.

“Julia and I have been on a slow, incremental mission to modernize a lot of the store –  everything that we do, we need to be mindful that it fits with the workflow and the way that we're doing things already,” says Nabi. For instance, with the introduction of a point-of-sale system, he was able to use training and support from Digital Main Street to hash out a six-month plan to put it in place. “It's making a lot of things a lot easier and reducing duplication,” he says.

Efficiencies were what Full Circle Foods was after through the program. With his web development background, Nabi had SEO optimization and digital marketing basics on lock, but the back-end infrastructure – the POS system, inventory and payroll tracking – has been given a boost.

“We're doing things in a way that's not going to disrupt our existing workflow and not going to create a lot of new training obligations for our employees,” says Nabi. The digitization has also had an unexpected consequence. Because of the efficiencies, they’ve been able to keep their staff lean, reduce duplications in labour, and use the gains to boost employee wages. “Now we're paying $16 an hour and we're working towards a living wage,” he says.  “Programs like Digital Main Street have helped enable us to do that.”