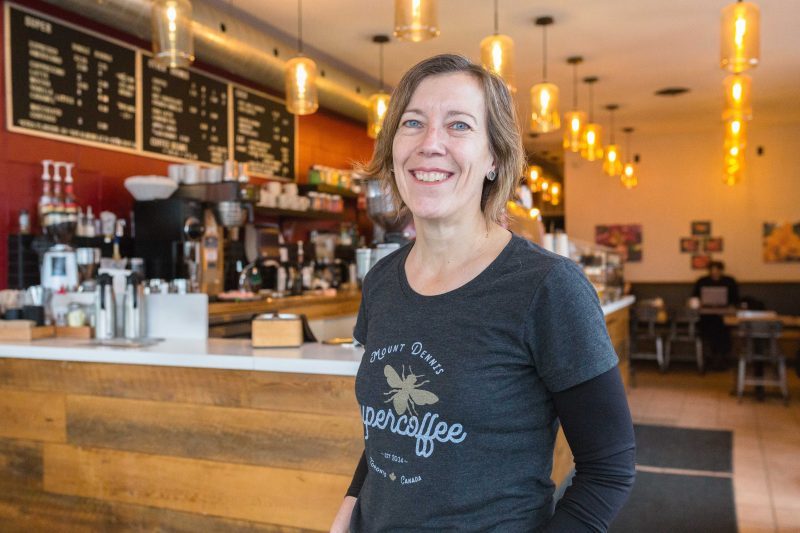 In Toronto’s Mount Dennis neighbourhood Supercoffee has found an unlikely clientele: travellers from Pearson airport. The coffee shop, perched at the apex of Weston Rd. and Eglinton Ave., has become a stopover for visitors on their way downtown.

“I recently had someone say ‘I had this eight-hour flight the first thing I did was look for a good coffee and you guys came up,’ ” says founder Cassandra Nicolaou. “That’s amazing to me.”

She credits her online presence on sites like TripAdvisor and Yelp with helping to draw clients who wouldn’t otherwise be in the area. It’s a challenge Nicolaou knew she’d have to face when she opened Supercoffee in May 2014.

The building had been owned by her father since the 1980s and had previously housed a sub shop run by her father (“He's always worked in fast food… (the) typical Greek Macedonian immigrant story,” she says.)

The neighbourhood was hit hard by the closure of Kodak in the mid-2000s, and after Nicolaou’s father set the location aside and moved north, opening Superburger just outside of Shelburne, On., the corner saw a string of unsuccessful businesses failing to survive in the transitioning neighbourhood.

Then her dad approached her with an idea.

“I had been working in film and television and social media for years and spending a lot of time sitting in coffee shops,” recalls Nicolaou. “We talked on and off about putting a coffee shop in the corner… I hemmed and hawed about it because I was doing what I was doing.”

But that project fell through and the coffee shop held her attention, so Nicolaou and her father invested in outfitting the shop that spring, opening it in May. It’s since grown to a second location in her father’s Superburger up north (The “Supercoffee” name is an homage to her father’s burger shop.)

“(The Mount Dennis location is) not a high-end glamour shop but it’s definitely different than anything else you'll see on that strip,” says Nicolaou, who’s also vice-chair of the Mount Dennis BIA. “I’ve always thought every neighbourhood deserves good coffee and that’s why we’re here – Supercoffee is a community hub.”

How Supercoffee has used its digital strategy to grow that community

Nicolaou’s always clung to the theory that small businesses thrive on the passion of their owners. If the entrepreneur isn’t around, eventually, it starts to show.

“I find running the coffee shop to be a really creative process, not too dissimilar to a film production, you're in production every day,” she says. “(Except) the production is never going to end.”

Containing that passion and keeping it apparent in her day-to-day has leaned on the coffee shop’s digital presence.

“You have to work really hard to keep yourself engaged, your staff engaged, your customers engaged… I think you always have to be evolving and doing something new,” she says. “That's where social media comes into play.”

She says she can see the “ennui” in a customer’s face when they walk in to see the same old croissants. The same thing goes for social media, you’ve got to keep it fresh, says the Supercoffee founder.

“Through things like Instagram specifically, we key into the younger clientele – high school kids, college kids, people in their twenties who are in the neighbourhood,” she says. “We'll post something we've just baked or just introduced and literally, somebody will come in an hour later and say, ‘I saw it on Instagram, I have to have two of those’ – it really works.”

Tapping into the middle-aged demographic has proven more challenging.

“Facebook is something we try to do,” says Nicolaou. It helps them be more targeted with their advertising. “The struggle is always getting the people from where they're sitting and their state of inertia and getting them to come on over to Supercoffee, that’s the end game.”

But she’s found new value in things like Trip Advisor and Yelp, where out-of-towners are more likely to look for coffee shops. Through Digital Main Street, Nicolaou was able to connect with a Google-certified photographer to take both exterior and interior photos for Google Maps. It’s helped to boost the businesses profile, something that brings even more diversity to the neighbourhood.

“Supercoffee has become a really good place for different types of people in that neighbourhood,” she says. “People always go – ‘Toronto's so diverse’ – but if you want to see diversity, come to Mount Dennis.”