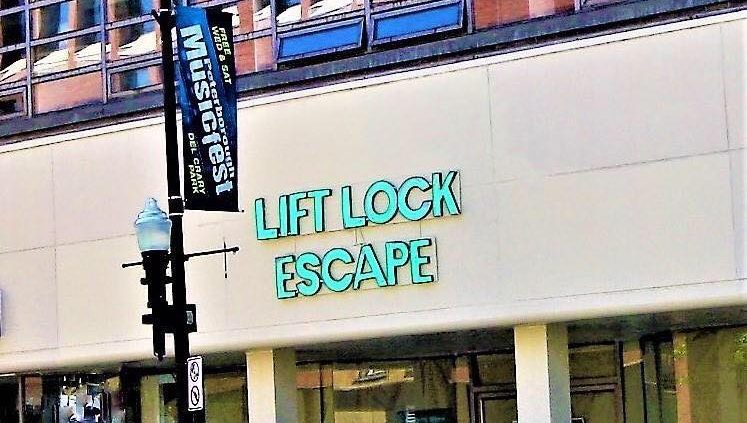 Of all the ways to find an exit-plan, it was the discovery of escape rooms that provided the perfect excuse for James and Lena Wallwork to leave Edmonton for Peterborough.

“I grew up here in Peterborough,” says Wallwork, who moved away from his hometown a decade and a half earlier. “I’d always been looking for ways to come back home.”

But it was toying with the idea of starting a business – an escape room in a market where the concept had yet to catch on – that inspired the husband and wife duo (both engineers) to uproot.

“They were starting to crop up around Edmonton,” says Wallwork, but he felt downtown Peterborough was underserved. “It’s where people go to have fun and have dinner and find something to do for the weekend – so it just seemed to be the perfect spot to put it.”

After doing market research, the Wallworks moved back to Peterborough and started building their escape room complex Lift Lock Escape. They put their engineering backgrounds to work on the intricacies, designing three escape rooms, building a boardgames cafe, and setting up a virtual reality system – all in the bones of a clothing shop. The rooms came slowly, there were a lot of props to fill them, but it was the digital side of running a business that proved most challenging.

They’d built the website and set up social media accounts, that was straightforward enough. But it was the peripherals – generating high-quality content and making sure the site was optimized for Google.

“We had learned a lot… we're pretty educated people, but there's just so much to know,” says Wallwork. “Contracting out things like that is, predictably, expensive for a small startup.”

Through the Downtown Peterborough BIA, they found out about the Digital Main Street program, which leverages grants and one-to-one support from the Province of Ontario and the Ontario BIA Association, to help main street businesses across Ontario strengthen their digital and online capabilities.

“I think we were the first or second group that signed up,” says Wallwork. They went through the Digital Assessment identifying their strengths and weakness and applied for the Digital Transformation Grant, watching the training videos to bolster their skillset. “It filled in the gap of the things we didn't know.”

Through the training videos and one-to-one support from the Digital Service Squad, Wallwork was able to take a deeper dive into how to create the sort of high-quality social content people are going to want to click on and share. He also learned how to decipher website analytics. “You’re learning how to better represent your business,” says Wallwork. “It’s an investment.”

And the impact of that investment has proven noticeable already. When Lift Lock Escape first launched, Wallwork says he funnelled “thousands of dollars” into traditional forms of advertising like print and radio. He says few people that have walked through the door have mentioned finding them through those channels. But with social media, the conversion is all right there – he can see it in action, people sharing and tagging and following.