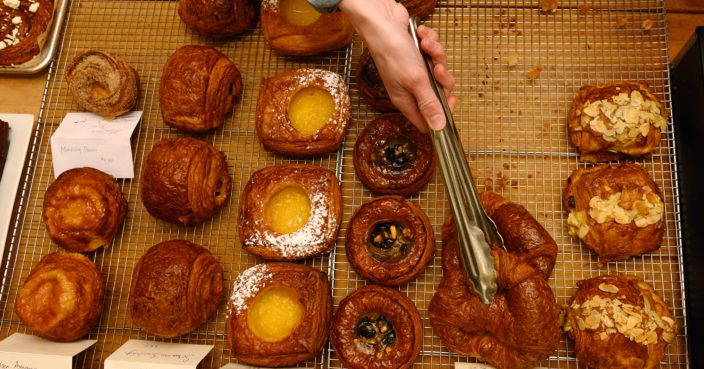 For a time, Daniel Sáez’s Noctua bakery embraced ephemerality, living in the inbetween of pop-ups, Shopify sales and social media buzz, his photogenic bread and pastries selling out weekly for months on end. It worked and felt like the logical next step in a career that included managing kitchens and baking for Sud Forno, Terroni, and the Beet.

Baking has always felt natural to him. Both of Sáez’s grandmothers were professional cooks and in Caracas, Venezuela, where grew up, he was surrounded by bakers. So when he decided to open a physical location within walking distance of his home in Toronto’s Junction neighbourhood, it’s no surprise Toronto’s blogosphere jumped on board. BlogTO and Taste of Toronto loved his story and his baked goods, posting glowing reviews and the Toronto Star wrote a feature. “It was a textbook case of serendipity,” says Sáez. “The day we opened, the Toronto Star released an article about us which helped us gain some traction.”

But it came at a cost. With only Sáez and his assistant to run the bakery, he became very busy, very quickly, his ability to devote time to his digital presence dwindled and he stopped doing sales through Shopify.

“I regret dropping the ball on that because it was a steady $8,000 to $10,000 a month and I was only baking once a week,” he says. The shopfront drives a whole different volume but he still felt that pull towards recovering “a little bit of that presence” – especially for the clientele who like to plan ahead to place their orders and pick them up.

That was on his mind when he reached out to Digital Main Street, a program which combines grants and one-to-one support from the Province of Ontario alongside partners like Google, Shopify and Mastercard among others to help main street businesses strengthen their online capabilities and plan for the digital future.

Alongside Digital Main Street, Sáez built the bones for online ordering and laid the groundwork for a bread subscription model. “(The team) helped me set up the delivery/pickup app to make sure people could place orders,” he says. “The team member, Jackie, was pretty instrumental in setting up the website.”

Noctua hasn’t launched the subscription service yet but the buzz surrounding the shopfront hasn’t died down. It keeps Sáez chasing his passion and dreaming up new concoctions. He says it helps to be in the Junction neighbourhood. “They really support anything local and they’re fiercely independent.”

The website is live and sales through it have picked up. He feels like he’s making progress on the digital terrain front despite the COVID-19 fuelled staffing challenges in the hospitality sector. “We’re getting there…” he says. “I'm back on track at least.”