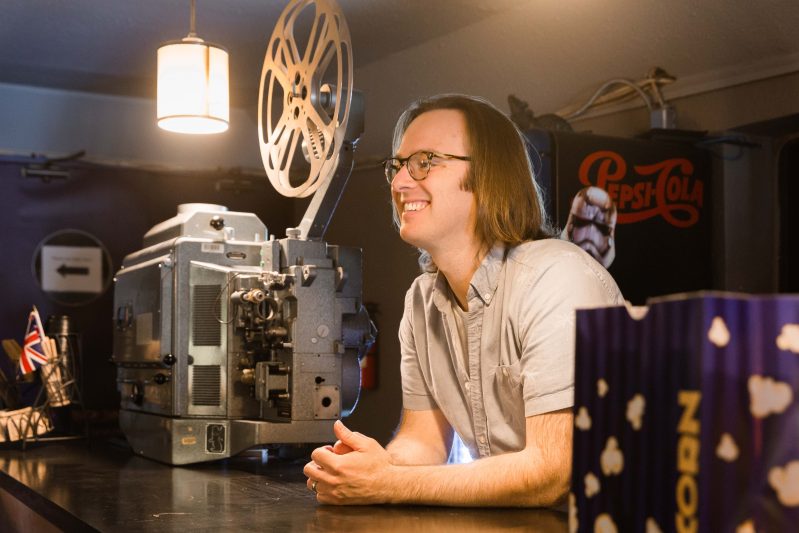 Inspired by their love of cinema, Daniel Demois and Andy Willick revitalized two aging theatres – the Fox Theatre in Toronto’s Beaches neighbourhood and the Apollo Cinema in Kitchener – drawing in moviegoers with a blend of classic, contemporary and cult hits. Now they’re refining their digital approach to connecting with their audience.

It didn’t take long for Daniel Demois and his business partner Andy Willick to realize they’d stumbled into new territory with their purchase of Apollo Cinema alongside friend and Kitchener native Matt MacKinnon.

The duo had spend close to a decade reviving the Fox Theatre in the Beaches area (one of the city’s oldest picture houses), with a unique blend of classics, cult hits, and contemporary flicks. But when they followed MacKinnon’s lead and brought their concept to the tech boomtown of Kitchener in 2015, the difference in audiences was clear before they’d even switched on the projectors.

“Before we even opened we had a massive following on Facebook,” says Demois. It was already higher than the Fox had garnered up to that point. To Demois, it meant their approach between marketing the cinemas and connecting with moviegoers was likely to vary drastically.

The duo got into the cinema business eleven years ago after sidestepping post-university nine-to-fives in favour of the riskier alternative: buying a theatre. The film industry was in the midst of a major disruption. Movie stores were close to decline and Netflix was introducing streaming. On top of that, independent cinemas were struggling to compete with mega-plex theatres with a seemingly endless amount of screens.

But Demois and Willick were nostalgic for their youth, the days of frequenting independent cinemas like the Kingsway Theatre and the Revue Cinema.

“That was our film education, seeing a lot of retro titles that you'd never have the opportunity to see on the big screen,” says Demois. “That's what interested us.” Seeing an opportunity to open their own they bought the Fox Theatre and later, the Apollo in Kitchener.

“We knew we could bring something slightly different instead of playing the old standards like Casablanca… maybe the Big Lebowski, something (for) a new era,” he says. “Nostalgia is constantly changing (and) we had a fresh approach we were excited about.”

The duo has been working with Digital Main Street’s consultants both in Kitchener and Toronto, finding ways to fine-tune their digital approach.

“Digital Main Street was really helpful in pointing out things that we might've been missing… it was helpful in filling in the gaps,” says Demois. They had a grasp of social media and its importance, but web design was foreign territory. Heat mapping, identifying the parts of the website frequently scanned by visitors, was particularly useful in terms of understanding how customers were using their websites. Through that they realized their membership program was being overlooked.

And even when people signed up, Demois and co. realized they could be doing a better job with the follow-through. “They helped us make sure we were welcoming people the right way, something we'd never done before.”

But marketing efforts is where the two cinemas diverge. Demois points out that the Kitchener audience tends to skew more towards the tech-savvy side of things.

“The Fox has had a monthly newspaper flyer forever, so when we took it over we adopted that,” says Demois. “With the Apollo we started with that as well but noted (at the) Apollo we only really need the website – at the Fox if we got rid of the newspaper it might suffer.”

It requires a different approach to marketing spend. For instance, $600 may support a month’s flyers, whereas with the Apollo that $600 could be used towards Facebook advertising or Google Adwords. “That seems to be a bit more of an easy way to track how you're doing as well with reaching people,” he says. “The newspapers might be gone but you don’t know if they got thrown in the garbage.”

It’s a learning process but slowly the Apollo and Fox owners are starting to gather analytics through social media and digital memberships to better understand their consumers. “(It’s helped tie) us more to the people's experience as opposed to what we think the people's experience would be,” says Demois. “We’re focusing a bit more on evidence.”