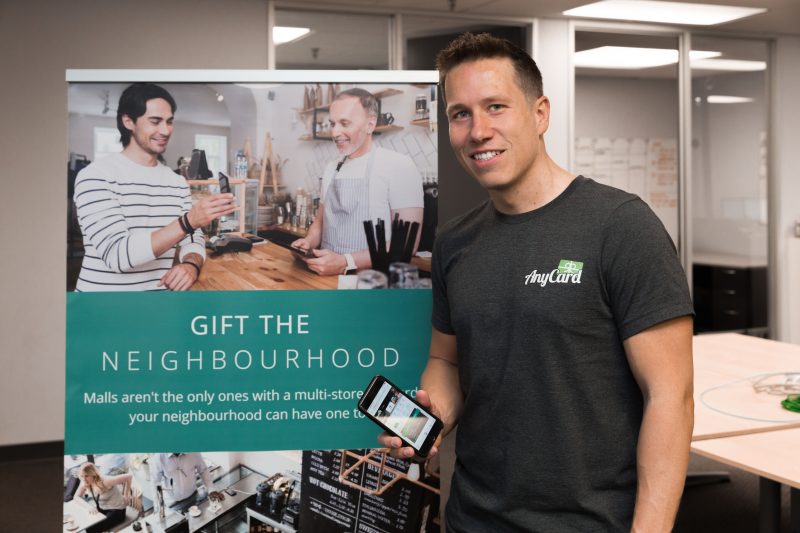 The gift card market has been dominated by malls and big box stores but startup Anycard is looking to level the playing field, giving main street businesses a platform for selling their own electronic gift cards.

Gift cards were a core part of Kirby Kazeil’s Suds Car Wash in Regina, Saskatchewan, accounting for hundreds of thousands of dollars in sales but they’d also proven to be a bit of a hassle. Between the exorbitant cost – 2,000 gift cards, sleeves and shipping set him back about $4,800 – and the volume of plastic being lost in the mail or under-utilized, Kazeil realized a simple solution was staring him down: electronic gift cards.

So he teamed up with serial entrepreneur Chad Molleken and self-taught programming whiz Chad Cardiff to launch Anycard, a platform for online gift cards.

“The Canadian gift card market is worth more than $10 billion dollars and it’s really dominated by big box retailers – you walk into Shoppers Drug Mart or Loblaws or the post office and you see that wall of plastic gift cards but they're often for big box retailers,” explains Molleken. “We wanted to find a way to reach out to neighborhoods and communities.”

While the platform has more than 500 businesses already using it, one concept they were particularly interested in exploring was a multi-store gift card akin to something like a mall gift card that could be used amongst small businesses in a community.

Toronto’s tightly-knit West Queen West neighbourhood seemed like the perfect proving ground, with Anycard launching a pilot in the neighbourhood in November 2016. More than 80 business have signed on since.

The e-gift cards can be purchased 24 hours a day and used at WQW shops ranging from Anne Sportun Fine Jewellery and Ben Sherman to restaurants like Chippys Fish and Chips the The County General.

“Right now the (Business Improvement Area) is covering the cost,” says Molleken. Fees range between 7 and 10 per cent depending on the volume of the card the business is selling, a sharp contrast to traditional gift cards where startup fees can rise from $250 to thousands of dollars just get off the ground. “(With Anycard) there’s zero cost to get started and you’re only paying if you’re selling a gift card.”

“They are very busy and often believe they lack the time the money and the technical know-how to get started,” says Molleken. With the doors opened to any business, Anycard is hoping to educate small businesses on the benefits of gift cards.

He points out that addition to users often spending anywhere from 20 to 60 per cent more than the gift cards value while shopping, the online platform allows them to analyze the data and see where, when and how the cards are being used. The digital nature also lends itself to advertising.

“(They can utilize) online channels like their website, Facebook or even if they have a newsletter they can include our link and turn all of those online channels into sales points,” explains Molleken. “We call it clicks to bricks, you don't need to have an e-commerce website to sell digital gift cards, it's just a link on any channel.”

The startup has been impressed with the uptake in Toronto.

“It's all about driving people back to these amazing communities like WQW or Leslieville or Parkdale,” he says.