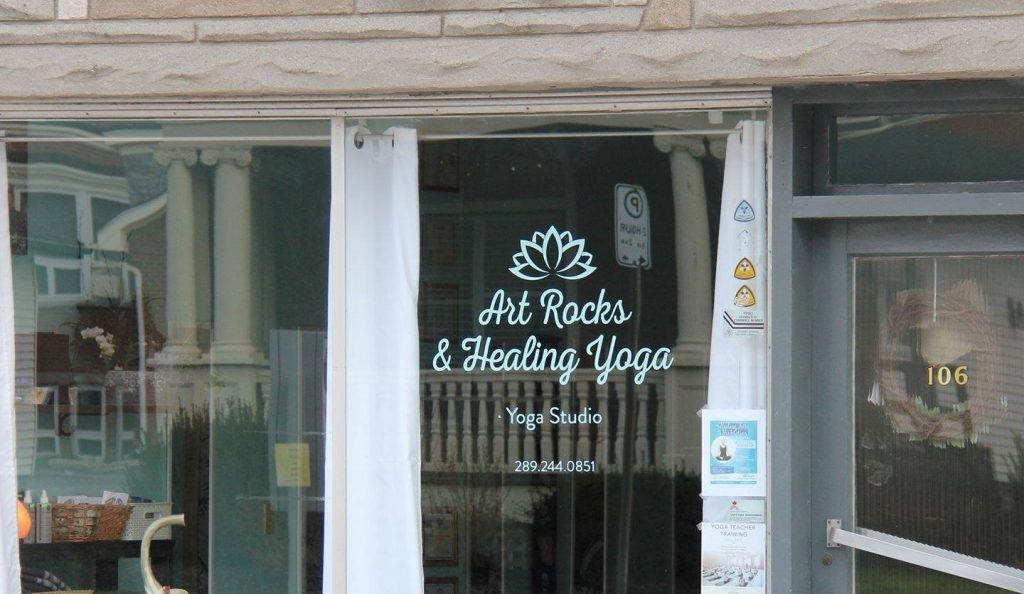 Entrepreneurship can be business acumen and strategy and audacity and instincts and whatever words will contain the uncontainable but more than that it is endurance – it’s your ability to capture and keep pace with your vision while the world changes around you. Audrey O’Marra’s Art Rocks & Healing Yoga Café in Dunnville is a manifestation of that sentiment.

“When I think back to 2004 and the first seed of this, I had a vision of what it would look like but not in my wildest dream did I think it would play out the way it is,” says O’Marra. First, it was an outlet for O’Marra to sell the art she created on the side while working as a full-time bookkeeper. She expanded to include other gifts and borrowed some space from her husband’s motorcycle shop. It worked for a decade and then she discovered yoga. “It took me about two years to get the training under my belt,” says O’Marra. She opened the studio portion of the business shortly after. “And then just before the pandemic, I had this great idea to open a café.”

Ultimately, the café would be her saving grace during the early part of the pandemic as it allowed her to preserve that connection with her community. But the pandemic has proven to be a part of a wider story of persistence. “What I've learned is I can accomplish things if I put my mind to it and I know what to do, and I know what avenues to go down, and I know where to ask questions and not be afraid to ask.”

O’Marra admits she isn’t always the best at looking outwards for support despite having a solid network to draw from. The first summer of the pandemic, somebody from Haldimand County came in to tell her about Digital Main Street, a program that combines grants and one-to-one support from the Province of Ontario and the Ontario BIA Association alongside partners like Google to help main street businesses strengthen their online capabilities and plan for the digital future. “I was like, ‘I don't even have time to look at that… what are you talking about? Get out the door,’ ” recalls O’Marra. “I was so frustrated, but then it was like, okay, take a step back… maybe there’s something to this… and there was.”

With her opportunity to run classes stunted by lockdowns, O’Marra wasn’t sure how to make the business work. “Food is really hard to make a living on… we were having perishable stuff getting thrown out and it was like, oh, now, what am I going to do?” she says. The uncertainty was discouraging but when everything felt like it was in disarray, she relied on that essence of entrepreneurship, that endurance. Like so many business owners in her position, she put her head down and started to rebuild, this time not asking how she was going to survive as a business but what she could do now.

O’Marra applied for the Digital Transformation Grant and received it. With the support in hand, she began to build up her digital presence, investing in the Modern Yoga Teacher’s Method, a program specifically designed for translating the uniqueness of a studio into a virtual environment. “I didn't want to go back to the model that we had – trying to fill classes was already hard enough,” says O’Marra. The program has proven to be a game-changer with O’Marra using it to build off the digital presence and social media insight she received from the Digital Main Street program and expand it with yoga-specific digital marketing techniques, which she put the grant money towards.

By upping her digital presence and streamlining the way she uses these tools, O’Marra says the return is in the time saved. “It’s a lot of work and honestly, I guess a lot of people don't want to dig in and do all that work,” she says. But for her, that pivot has helped her find a way forward.

Each time O’Marra picks up a new skill, she says she feels that momentum again. She’s even making plans to add a pottery studio to her business. “You just have to be able to navigate through it and not give up.”