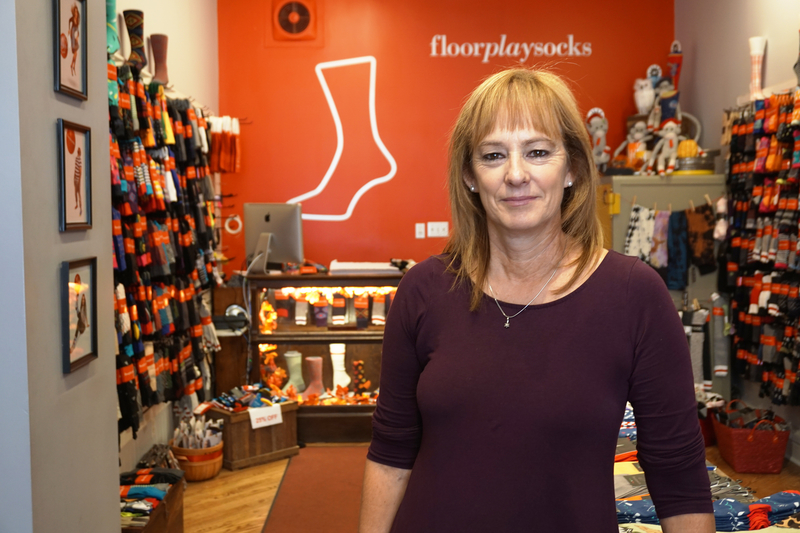 Janet Wright left a career in municipal politics on a lark in 2013 to launch FloorPlay Socks in an unused retail space on Queen Street West at the front of her husband’ s office for his video production company.

“My husband Mark, decided he was going to rent it out, he said ‘ you can have it for six months, let’ s see what happens,’ ” recalls Janet. It was a complete gamble on a burgeoning playful sock trend that was only just starting to take hold. “My original plan was if socks didn’ t work out, I’ d move on to something else.

”Mark gave her a small loan and in June she opened her doors.

“By September I’d paid him back,” she says. “It just started growing… I don’ t even know why, maybe because it's easy (to buy someone socks) or because we love them –I always say ‘ you could have a bad hair day and still buy a pair of socks.’

”Within six months she knew she had landed on something special but before she plotted out future growth, she turned her efforts towards launching an online store.

“I think it’ s important that every store has an online presence even if you don’ t sell online… just show your products off, take pictures, put them up every day,” says Janet adding that she uses Shopify to host her store. “We've shipped as far away as Australia… we ship everywhere.”

Over the past three years the store has expanded into two other locations – one just north of Eglinton on Yonge and another in Hamilton. But keeping pace with the expansion means staying in contact with all the other stores. FloorPlay enlisted in a cloud-based system to communicate between stores.

“I can be at home work at home, I could technically be anywhere in the world,” she says.

She also tracks sales trends, an important metric that has made the Queen West shop the go-to destination for Toronto’ s quirk sock needs.

“Our point of sales Vend breaks it down by brand – by gender in brand, by category within brand – so I can tell you any given day how many socks we sell,” she says. “It’ s good because I can see trends, I can tell you from my perspective what is no longer the trend… I’ m constantly buying.”

The majority of the products come from small Canadian or American designers, many coming directly to her. She also sources suppliers by researching up-and-coming sock startups.

Social media is also a critical part of the business, something her kids have shown her the ropes with. It helps her connect with clients and expand her footprint.

“People come in and will say ‘ can I take a picture?’  and ‘ I’ ll say only if you tag us,’ ” she says. In today’ s world of Google search rankings and online marketing, those tags become a commodity in-and-of themselves.

“As far as the social media side, you’ ve got to do it, you’ ve got to be out there,” she says. “People will look for you and if you’ re not there, they'll find someone else.”