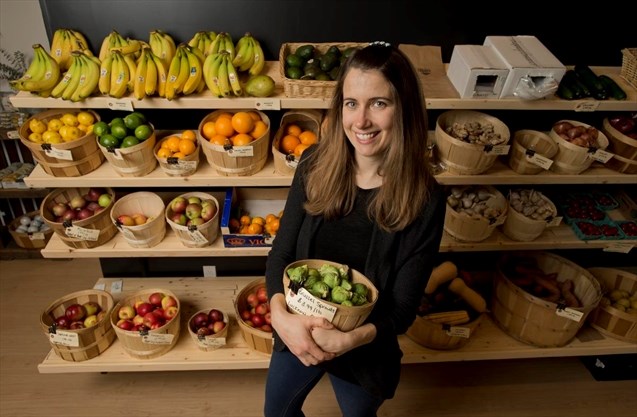 Legacy Greens Uses Digital to Diversify Beyond the Farm

Last holiday season, Jordan Dolson, owner of Legacy Greens, a local-focused greengrocer in downtown Kitchener, spent a few weeks pulling together a list of products to create a special Christmas shop on their website.

“(It) was a lot of work and it didn't work,” she says. The online sales didn’t justify the time spent. But the lesson she got out of it did. “I think people do have to realize some things fly online and some things don't but you have to try in order to be able to know and learn from it.”

Legacy Greens has been experimenting since day one. The business started with a small plot of land rented on Dolson’s parents’ farm near Listowel. It was a part-time project with her still keeping her day job in Guelph. She grew some vegetables and sold them to a store, a restaurant, and opened a stand at the Stratford’s farmers market.

“That gave me the opportunity to test out entrepreneurship on a small scale with low risk,” she says. Dolson left her job that year and began working on the concept for a closed-loop grocer that would sell locally-sourced produce and minimize waste by turning unsold produce into grab-and-go foods like soups and salads.

She opened a six-month pop-up in a space downtown Kitchener and by the end of that stint was breaking even and growing her clientele. She also started to experiment with digital tools.

How digital has helped diversify Legacy Greens beyond the farm

“We started using Instagram pretty heavily when we launched our business and I launched a Shopify site within a couple of months of opening,” says Dolson.

Just a reminder that we are on summer holiday until Tuesday, September 3rd. Our bricks & mortar store is closed 😎. But our online store is OPEN! Register for our next produce box subscription online. Link in profile.

They started with soup delivery, which didn’t work out so well. Then they created Christmas boxes stuffed with local gifts. “We used the Shopify site for shipping and preorders,” she says. It was also a good pilot for produce boxes which Legacy Greens also added within six months of launching. “A lot of people pre-order those online,” she says pointing to the convenience of online payment for subscription or pre-payment.

Pre-orders have been integral to the online side of her business.

“People gravitate towards the weirdest things,” she says, with a laugh. “We had a bakery do a cruffin day with us – a croissant muffin – and we put those up the day before the event pre-order and people went wild.”

She says it allows her to know how much to order. “It's good advertising and more convenient for the consumer, they're more likely to convert to sales if they don't have to come in person.”

“We post something new or a beautiful photo of, say, raspberries when we have raspberries in and people will come and they will tell us they saw it on Instagram,” says the Legacy Greens owner. “We definitely see results with that for sure.”

It’s what digital has allowed her to do, and connecting with Digital Main Street has, she says, validated her approach. She says she participated in the Digital Transformation Grant program and plans to use the grant money to invest in an online photography course, search engine optimization for the website and work with Instagram influencers and contributors to expand Legacy Greens content.

“You're not going to survive unless you really take it to the next level in terms of the customer experience and your brand,” she says. “You can't be competent… you have to be exceptional.”