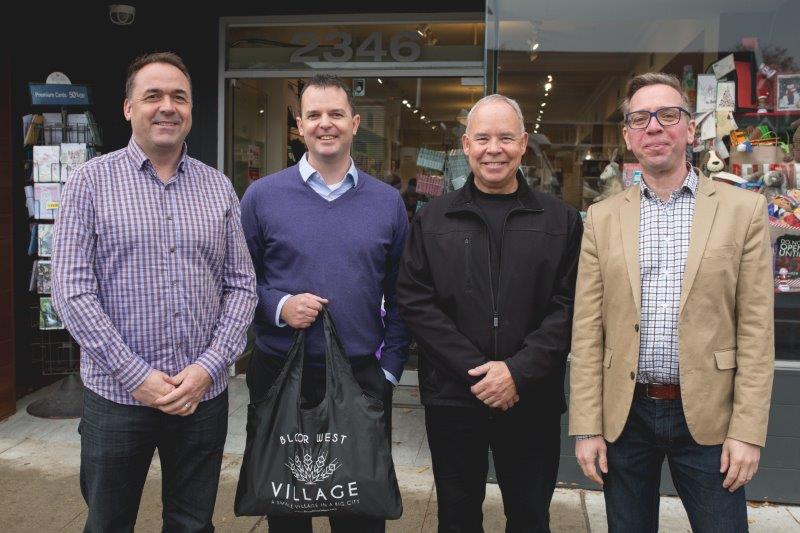 Leveraging high speed networks and the proliferation of mobile devices, Bloor West Village and PeopleFlow have teamed up to track mobile movement, better understand who’s shopping in the area and figure out how to make the area more attractive to visitors.

A day into PeopleFlow’s pilot run on Bloor West Village, David Howitt, chairman of the Business Improvement Area’s board and co-owner of Marlborough’s Stationery, was sifting through the data of local shoppers collected by the system. He called up Todd Lewis, president and CEO of the platform, which monitors and analyzes the movement of mobile devices within a given region.

“He said ‘hey, look, right in front of our store from six to seven your system says there’s a spike in traffic,’ ” says Todd. “So I looked into it.”

Sure enough, it showed a cluster of anonymous mobile devices in the area. So the next day, Marlborough’s stayed open an extra hour. They made an extra $200

“He had no idea,” says Todd. “It’s one of those things where you have these perceptions of what’s happening but when you have real data that’s recorded consistently it can give you a whole different perspective.”

The idea of collecting shopper data isn’t new – for years businesses have been asking consumers for their postal codes to see where they’re coming from. But PeopleFlow takes it a step beyond. It’s the sort of solution that could only exist at a time where Internet network infrastructure is improving and mobile devices proliferate.

Built by Todd’s geomatics technology company Spatial DNA, PeopleFlow is capable of treating a physical environment in the same way Google Analytics treats and collects data from a webpage. Consumers with mobile phones moving in and out of space are assigned anonymous identifiers then PeopleFlow pinpoints traffic flow patterns and users, like small brick and mortar businesses or B.I.A.’s, can get an idea of how often people are visiting and where they’re coming from.

Todd first brought the idea to Toronto B.I.A.’s in June 2015. They saw some interest, but it was hard to find a B.I.A. who wanted to move first. That is, until Todd connected with David at Bloor West Village.

“David at Bloor West prides himself on being the first mover on lots of things – they were the first B.I.A. in North America to adopt the technology,” says Todd.

They started rolling it out in August but realized quickly that there was no high-speed Internet infrastructure in the area. There was, however, a solar light system. So Todd and co. partnered up with Mississauga-based GenWave Technologies to overlay the Wi-Fi sensors and microwave relay network, piggybacking off the existing infrastructure. They went live two weeks later, just in time for the Ukrainian festival and had another chance to test it out during the Pumpkin festival in October.

“From a B.I.A. perspective, they’re doing marketing efforts and events… trying to figure out what the effectiveness of those events are,” he explains. “It’s one thing to draw people (but) do they come back to the area?”

In an area like Bloor West where segregated bike lanes have reshaped the flow of traffic, PeopleFlow has become a value tool for seeing what the longer-term effects – both good and bad – might be on the businesses. But Todd sees a future where businesses themselves start to adopt the technology or opt-in to the platform in order to garner some insight on who’s visiting the area and how to keep them there.

“(Some businesses) look at the solution like it’s going to cost a lot of money,” he says. But a lot of these solutions have fallen in cost and as Marlborough’s found out, the data pays for itself.

“It equates to one extra customer a month (to) pay for the solution,” he adds. “(PeopleFlow) quantifies everything so that they can make decisions based on what’s actually happening.”