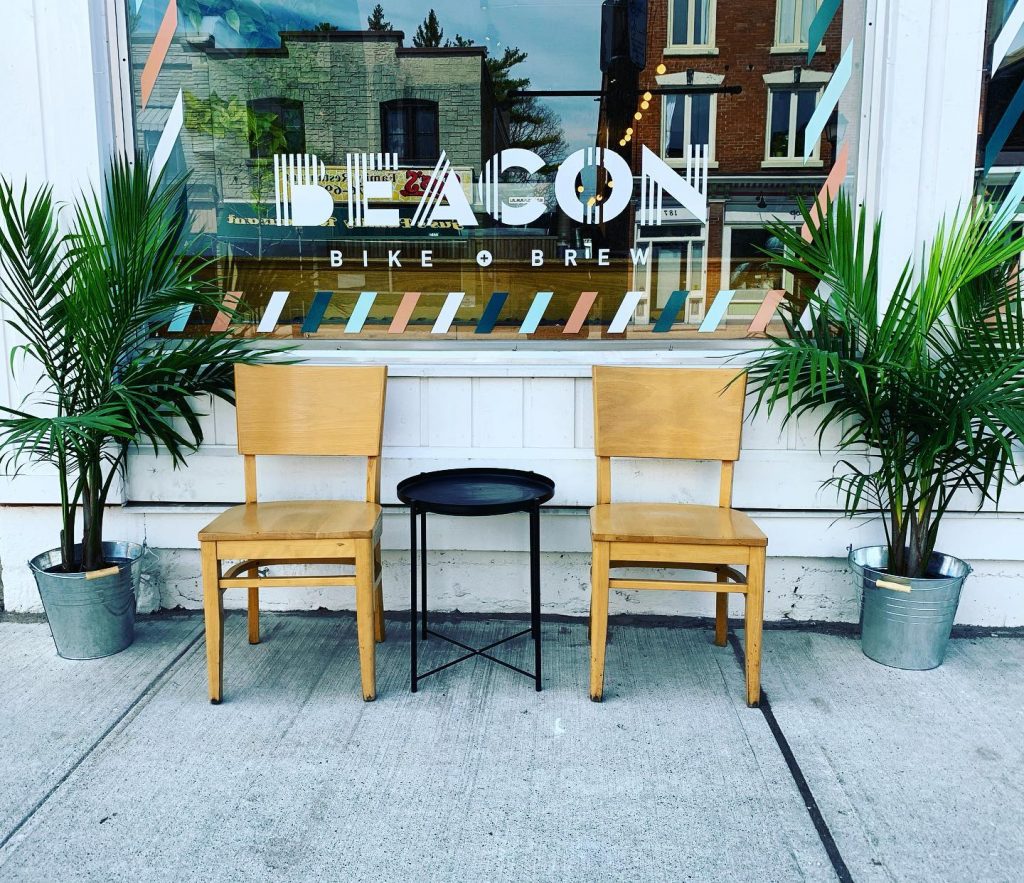 There’s this moment Jordan Malka remembers from the early months of Beacon Bike and Brew where a local dad started reading a children’s book in the back of the Picton café and a small crowd of kids gathered around. “There must’ve been five or six random couples visiting with kids, and the kids are all just sitting there while he read,” says Malka.

It was a simple moment, but something about it felt bigger to Malka, like he was on the right track, like the café and retail space he and his wife Stephanie had become what it was meant to be: a beacon for the community. Maybe that seems impossible now in the age of lockdowns and social distancing. But improbably, Beacon has managed to retain that community feeling. Even with the chairs stacked on one another and set aside, patrons still strike up conversations as they line up for that seemingly unassailable ritual, the coffee break.

The Malkas opened the space in the summer of 2019. Toronto ex-pats, the pair found their way to Prince Edward County in search of settling. “We wanted to put roots down, buy a house and have a positive impact in a community.”

The space on Picton’s main street was a chance opportunity. Malka also knew it had to be different. They liked the symbolism of a beacon (they frequently went lighthouse exploring with their son in the early days of moving out here) but Malka also wanted it to be about cycling, a passion of his. “There are great bike shops in Belleville and there are a couple in the County,” he says. But they wanted to create a community hub around active lifestyles, a space that would be good for kids and parents as well as friends to meet up for a glass of wine or a beer.

“(Prior to COVID-19) we were on the right track,” he says. But a series of lockdowns has pushed them to adjust that model and focus on their digital presence. Malka, who’s on the local BIA heard about Digital Main Street as it was rolling out. The program, which combines grants and one-to-one support from the Province of Ontario alongside partners like Google to help main street businesses strengthen their online capabilities and plan for the digital future, came at the perfect time. Beacon had a landing page and a simple website with a gallery that had allowed them to work with local photographers, says Malka, who’d up-to-that point, managed the website himself and needed some help.

“We were going to build a small online store, but we also didn't intend on shipping products across Canada or having web ordering,” says Malka. He received a Digital Transformation Grant through the Digital Main Street program and was able to funnel that money into a local business that helped improve their website and eCommerce strategy.

“As a fellow business owner, I knew the struggles that COVID presented, so it was great – I can get this grant, it’s going to improve my business and I can spend that money locally in the community,” says Malka.

Since investing in its digital presence, Beacon has seen some unexpected results. They’ve been shipping products across Canada and also some products into the U.S. “I’ve actually sold American products back into the U.S. because I was the only vendor who had it and the SEO work that was done on (that) product in particular,” he says. “It’s crazy, but again, it’s because the work was done on the backend.”

Going forward, Beacon plans to use an online program for booking appointments with its bike mechanic, a feature that is quickly coming into play as Prince Edward County hits the tourist season. “Going into this season and having the website in a clean, manageable, SEO-driven format like this is going to make it so much easier,” says Malka. And for the team behind Beacon, streamlining the backend means more time doing what they love, what the shop is built around – spending time with its community.