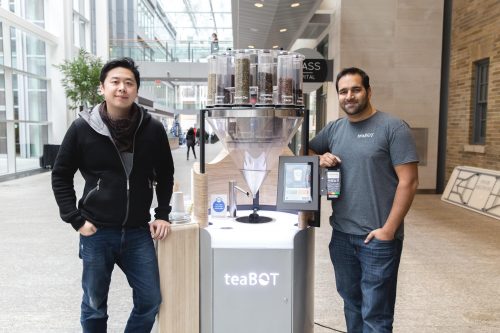 For teaBOT there’s no better home base than Toronto: international tea drinkers, long winters and an inherent sociability. But that hasn’t kept the Toronto-based startup from expanding its robot army beyond the ecosystem here to cities like Palo Alto and Chicago.

Brian Lee and Rehman Merali’s tea-fuelled robot army began its takeover of comfort in the upper reaches of Northern Ontario. It was in Sudbury, where the pair had grown up and Lee’s family had a teashop, that teaBOT tested out its first prototype, a scheme first dreamed up over sushi in Toronto, long after they’d abandoned their hometown and moved to Southwestern Ontario to pursue careers in engineering.

“You wouldn’t think it, but it takes several minutes to grab a tin off the shelf – the right tea, the right amount – and figure out the proportions, boil the water (then do) the money transaction,” says Merali, who has a PhD in Autonomous Space Robotics. “(Lee) was wondering if we could develop a way to optimize this process, to basically automate it… he had some ideas and I helped him flesh it out.”

The first iteration of teaBOT was a machine loaded with the best sellers where Lee’s mom could press a button and the robo-tea-maker would add the tea, boil the water, pour it in the cup and let it steep.

“She could just hand that to the customer and then do the money exchange,” says Merali. “It was really optimizing her store.”

But after getting the “bot” set up in Sudbury, back in Toronto, Lee and Merali couldn’t help but feel like the project was unfinished, like it had greater potential. They started dissecting what they’d created.

“When we looked at this initial prototype of ten blends, we noticed that each of the blends is only three or four ingredients,” recalls Merali. “I think that was kind of the a-ha moment when we went from a product to a business.”

They realized they could break down the blends into their individual ingredients, design a nice user interface and “bring it from behind the counter to the front of the counter” letting customers create their own blends wit the push of a button.

“We went from ten different blends to ten thousand different bends,” he says. The options seemed endless, and today, have proven so – consumers can create their own individual blends, name them, tweet them out and share them – but back then in 2013, it was just a concept. So they brought it to the Creative Destruction Lab at the University of Toronto.

“We were so focused on the engineering questions at the time that it actually opened our eyes to the bigger business case,” says Merali. After working their way through the challenging “Dragon’s Den meets Survivor” process at the CDL, the duo brought teaBOT to the MaRS JOLT accelerator.

“They gave us our first cheque and with the investment in the company we were able to develop the first commercial prototype,” says Merali. They put it in different universities and colleges and also tested it out in high-end retail like Harry Rosen on Bloor during the holidays. With proof of concept, teaBOT went south to Y Combinator in Silicon Valley for the summer of 2015. During that period they would grow to Palo Alto cafes and Google’s office.

But Toronto drew them back.

“It’s one of the most international cities in the world and tea is very international,” says Merali. “If you look at the statistics around it, North America and Colombia are the only places drinking more coffee than tea – that’s why Toronto is such a great ecosystem.”

He says teaBOT has no intentions of moving, they’ll just establish satellite operations – like the ones they already have in Chicago and San Francisco – in new markets as they see fit.

“Toronto is nice and central,” he says. “(Here there are) SR&ED credits… things like that have been helpful for us but the ecosystem has been fantastic and mainly what drives our business to stay here is our customers – being a colder climate there’s just more winter, people drink tea more.”