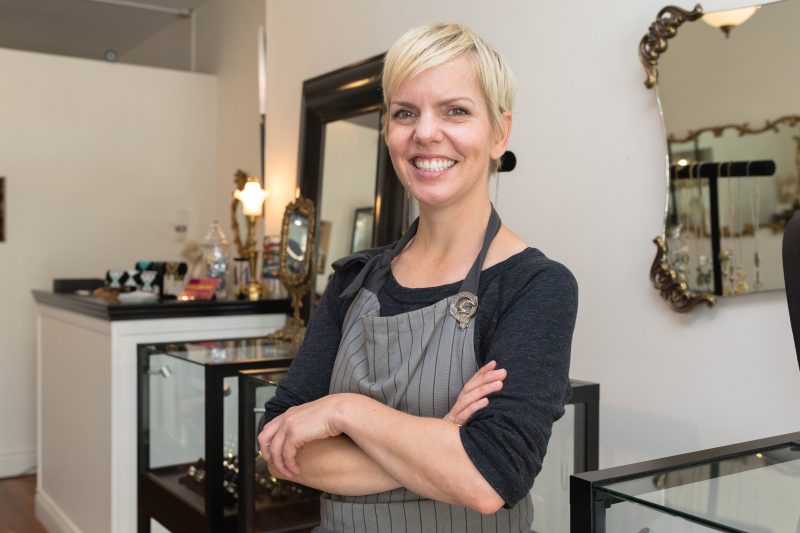 After a decade and a half under the umbrella of other retailers, jewelry-maker Karen MacRae and master goldsmith Sabrina Melendez struck out on their own to build On the Other Hand, a new shop in Leslieville focused on high-end jewelry. But growing their footprint will require a social strategy built on authenticity, trust and, above all, community.

At its heart, Leslieville’s newest jewelry shop On the Other Hand is very much a traditional gold-smithing shop.

“I generally use pencil and paper to convey my ideas and hand carved waxes,” says owner and jeweller Karen MacRae. And Sabrina Melendez, the shop’s Swiss-trained master goldsmith, adds her own traditional flair to the high-end repair work at the shop. “Between the two of us we have over 30 years of experience.”

That traditional skill set has served as a beacon, drawing customers into the space and prompting it to be nominated as one of the best jewelry stores in Toronto for NOW Magazine’s 2017 Reader’s Choice awards.

But eight months in, MacRae is realizing running her own shop requires a new set of skills.

“Self-promotion is really hard,” says MacRae. “I’ve worked for ‘me’ those entire 15 years but I’ve never really had to rely on myself to promote my work – that's probably the biggest learning curve.”

Particularly, when it comes to social media. MacRae has started sending newsletters with MailChimp and writing blog posts but it’s social media that has proven to be the most challenging.

“It doesn’t come naturally to me… I'm not part of the generation where it’s in your blood,” says MacRae. “I tell myself I’m going to post something every day, and it ends up happening twice a week, if that.”

Here’s what the On the Other Hand owner has gleaned about self-promotion since opening the shop:

“It's really important that we have a bit of a community feel because high-end jewelry and high-end repairs require a lot of trust,” she says. And part of building that trust is understanding the nuances of communicating with social media. For instance, MacRae has learned to not expect responses to post from every follower every time.

But authenticity is also key when it comes to using social media.

“Authenticity is more important than I originally thought,” says MacRae. “I don’t want to just post something every day just for the sake of posting because it doesn’t feel authentic… I think people sense that.”

It goes hand-in-hand with developing an aesthetic and sticking to it, something MacRae is currently working to build.

“You see a really successful Instagram feed and they have this really beautiful aesthetic flow –you're able to go back through the feed and see the consistency,” she says.

While flow and authenticity help build trust, MacRae says she’s learned not to overlook the role of hashtags in boosting visibility. “#Leslieville… just that hashtag in itself is a really powerful tool,” she says. “And Leslieville is such a community of neighbours.”

While On the Other Hand has yet to reach a critical mass of followers, getting a nod from The Star in March and a nomination in NOW haven’t hurt. The next step, says MacRae is really leaning on the social strategy and using it, combined with the shop’s unique offerings, to grow it’s follower base.

“I think once we get there I will be able to embrace the form a little bit,” she says. “But it’s amazing how difficult it is to understand – the subtleties are really important.”